Racer is a free car simulation project, using real car physics to get a realistic feeling. Cars, tracks, scenes and such can be created with relative simplicity in mind (compared to other driving simulations). The 3D and other file formats are, or should be, documented. Editors and support programs are also available to get a very flexible and expandable simulator. It uses OpenGL for rendering.
It attempts to do well at the physics section, trying to create life-like cars to emphasize car control and doesn't cut back on realism in the interest of fun. If you've played Grand Prix Legends from Papyrus, you'll know what I'm talking about.

* It's totally free! (for non-commercial use)
* Available for multiple platforms; Windows 2000/XP (95/98/ME may work but have some trouble with fonts), Linux and Mac OS X.
* 6 DOF chassis movement (the car can move around freely); around 15 DOFs in a total car (wheels/engine/clutch etc).
* Uses motion formulae from actual engineering documents from SAE for example.
* Incredible flexibility; almost everything is customizable through ASCII files.
* Commercial-quality rendering engine (with smoke, skidmarks, sparks, sun, flares, vertex-color lit tracks).
* Support for Matlab (log files can be converted into Matlab format for further analysis & processing).
* Support for Matrox' Surround Gaming. See the corresponding page on Matrox' site.
* Lots of addon cars and tracks available on the web (over 100 tracks & cars).
* Easy integration of your own cars and tracks that you create in ZModeler, 3D Studio Max(tm), Maya etc.
* At least 15 degrees of freedom for a regular car (6 DOF for the car body, 1 for each wheel's vertical motion and 1 for each wheel spinning, and 1 for the engine, several more for the driveline). Depending actually on how many wheels you put on the car.
* Real-time internal clock; no physical dependency on framerate. Controller updates are also done independently of the framerate.
* Not limited to 4 wheels; anything from 2 to 8 wheel vehicles are currently supported (but mostly untested, and some problems with hardcoded differentials for example may exist (v0.5.0)).
* Not much constraints on the track data; surface info is taken from polygon data (VRML tracks), and splines are used to smooth out the track surface (polygons are too harsh for driving on just like that).
* Tools to modify the cars & tracks are freely available on this site (though some external utilities like 3D Studio Max are recommended for best results).
* Some used algorithms are explained on this site, so this site can be interesting to learn from if you create your own car simulation software. Also, links and references are available.


"I teach race car design at the University of New Mexico and have been looking for software like Racer for over a year so my students can actually drive the car they design before they build and compete it.
...
With Racer we'll be able to do what the students really need - to be able to design and test their design on a realistic track before they build it."

"Tony and I are really amazed at what you are doing with it."

"Thanks for your good work with Racer. After Grand Prix Legends, it is the best I've seen. It's the first sim, that has made me to ignore GPL almost completely

Next to the fact of being open and free, this site can also help other people who are implementing a car simulation themselves (and there are a lot of them). I can say is that creating a car simulator takes more than I originally thought; a lot of reading is going into it, lots of linear algebra math, lots of physics reading and lots of time and energy to get things right. The nice things about it, though, is that it is an endless field. In all corner of a carsim, you can find new areas where you need to learn & program. That's good, in my case, because I don't like endless hammering on optimizing algorithms, but instead want to expand in every which way.

Racer is continously under construction, and will be for quite some time. A lot of aspects are involved in creating a car simulation, and I do all this as a hobby in my spare time (which isn't a lot). Efforts are made to come up with a solid base quickly, so models created now, be it tracks or cars, will be supported in future versions. The open file format design helps this a lot; you can just use 3D Studio Max for example to create models.
Zum Vergrößern anklicken.... 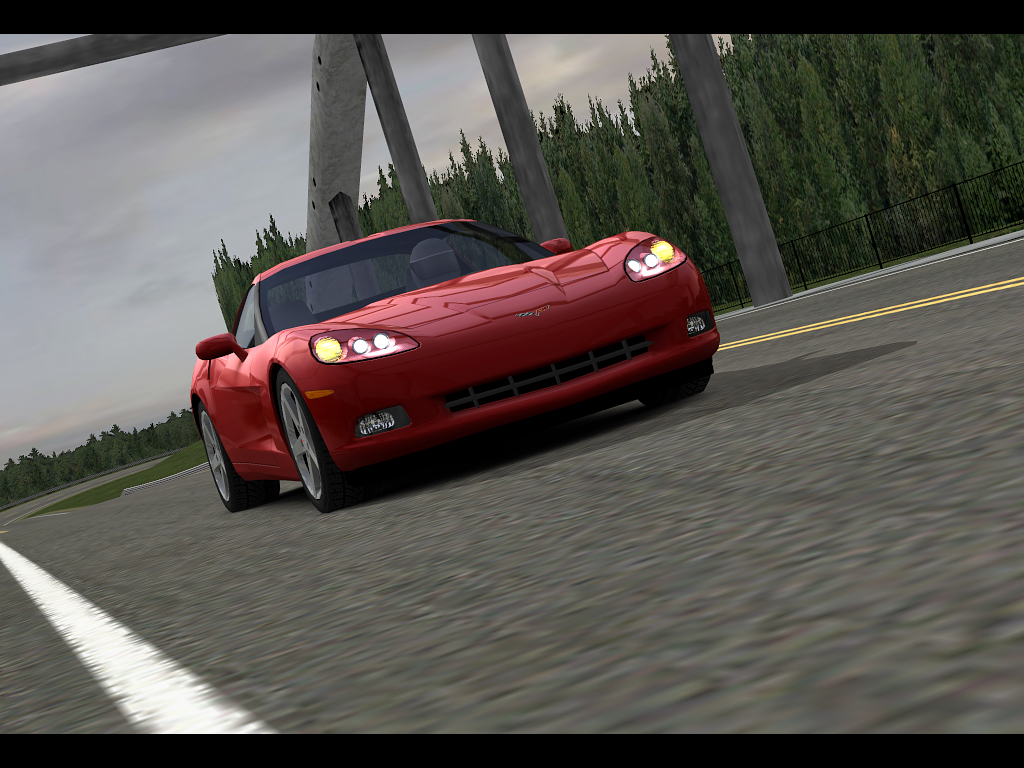 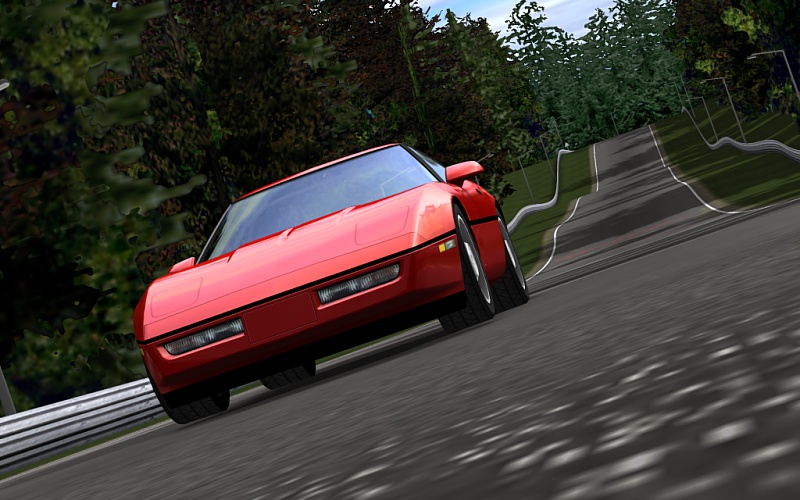 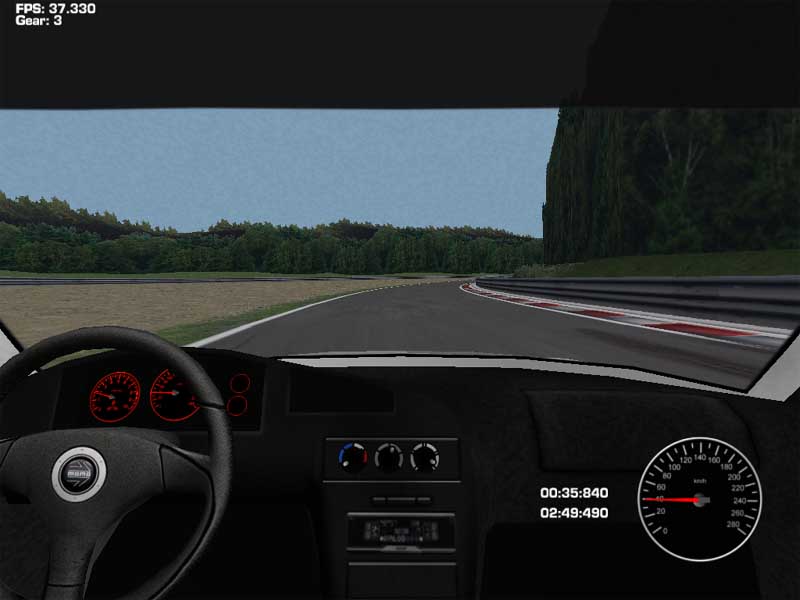 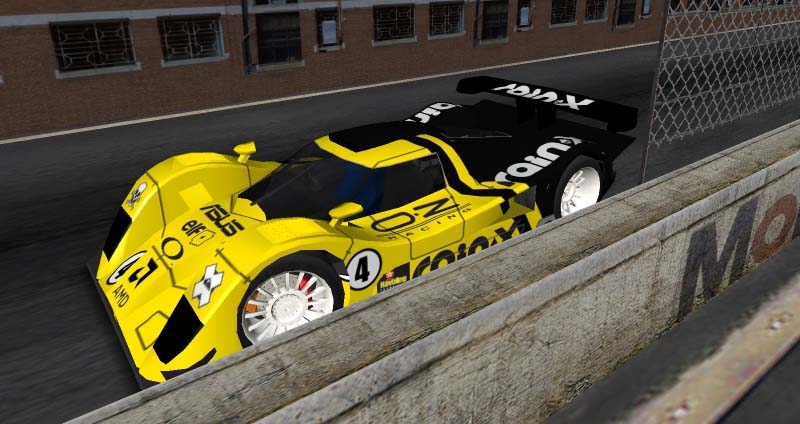 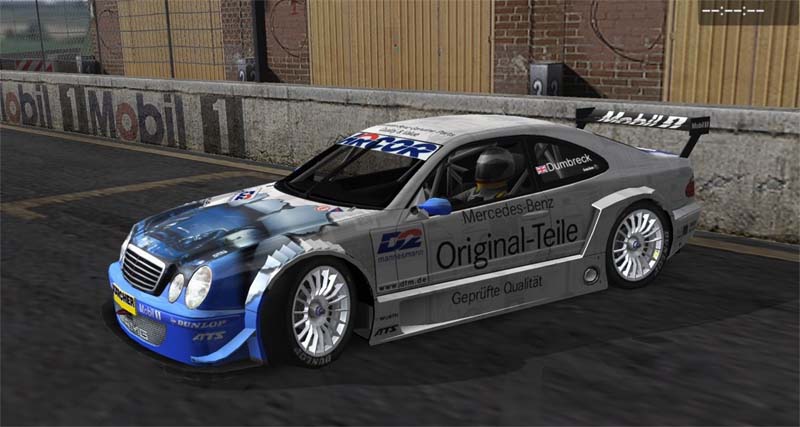